Virtual Seoul Playground, one and only virtual team building programme that planned and developed by Seoul Convention Bureau (SCB), which is the latest “fun” addition to its digital offerings that include the Virtual Seoul and Seoul MICE World.

Teamwork divides the task and multiplies the success. Coming together is a beginning, staying together is progress, and working together is success. Let’s bring your delegates closer together with the Virtual Seoul Playground, even they are located in different geography!

As the Virtual Seoul Platform was created to serve its innovative destination marketing, Seoul Convention Bureau is actively promoting the attractiveness of Seoul as a MICE destination virtually through its meeting-hosting platform with K-experience team building programme. In the Virtual Seoul Playground,  MICE delegates able to learn more about different cultures and history of Korea, while working as a team to overcome fun challenges and exciting games along the way.

Are you thinking of team building activities that packed with local culture and authentic experiences in Seoul? Now, you can try to explore SCB’s newly launched virtual team building programme, while waiting the travel restrictions to be lifted in near future. The games in the Virtual Seoul Playground are implementing traditional Korean activities and popular Korean food.

Yunnori, also known as Yut Nori, is a traditional Korean board game that is often played during holidays, especially during Korean New Year. It consists of a board, 4 half moon shaped Yut sticks, and 8 small tokens or markers, where each team has 4  tokens or markers. However, there is only 2 tokens or markers per team in the Virtual Seoul Playground due to the time limitation. 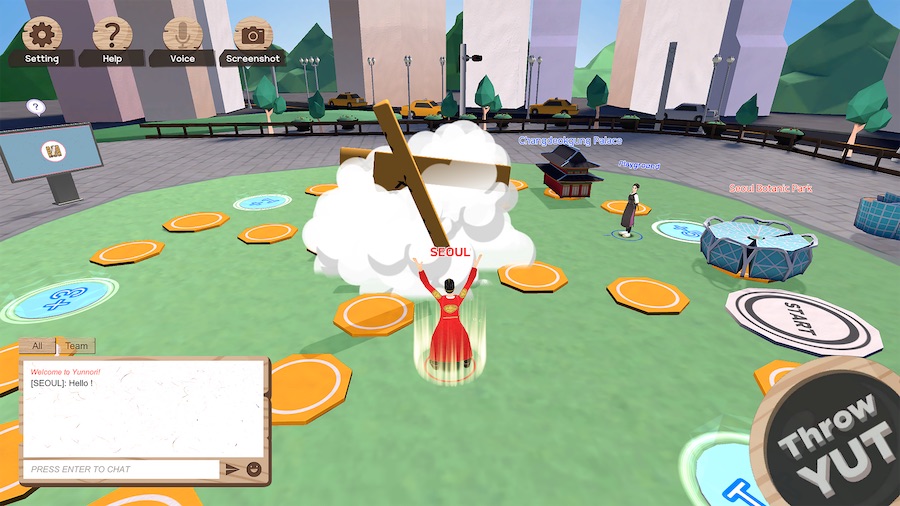 Yunnori is played with 4 half moon-shaped yut sticks being cast to determine how far a token (yut mal) can advance, and each combination has an animal name. In order to win the game, the two tokens or markers of each team should return to the starting station after passing other station in a counter-clockwise direction.

Game Rules
The scoring based on a schematic representations of sticks

Yunnori is a significant traditional Korean board game as it displays Korea’s agrarian culture and Korean ancestor’s hope for good harvest. As the board represents nature and the moves of sticks and tokens signify traditional livestock, Korean pray for a good year ahead while playing the game.

That’s all you need to know in playing Yunnori! Enjoy this fun game with your friends. It is not merely game, but a representation of wisdom that has been accumulated for generations. Now, it has been developed as a part of the valuable K-culture that can be shared by everyone. 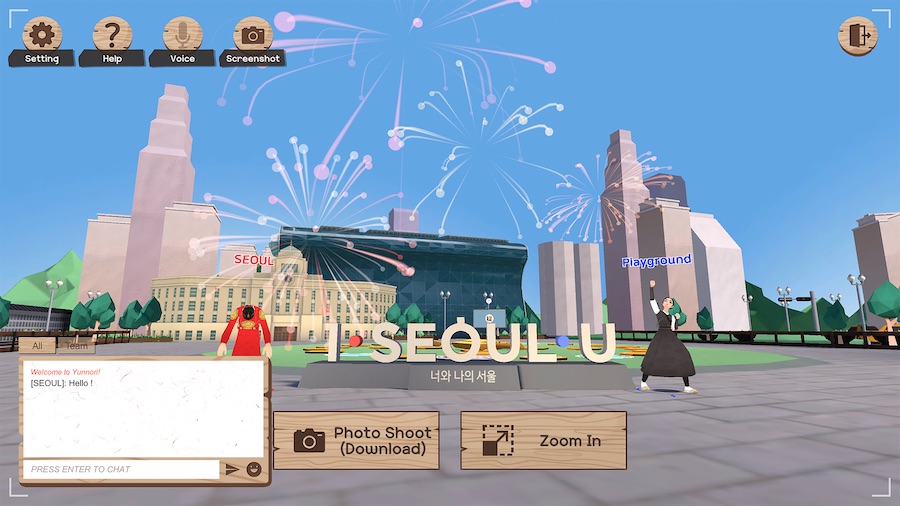 Game Venue: Seoul City Hall
In this virtual Yunnori game, the board is represented by an oval shaped grass square in front of the Seoul City Hall, which is a cosy place to hold various events and cultural festivals, as well as enjoyed by many Seoulites as a place to relax.

Seoul City Hall, a striking eco-friendly building with a unique exterior, making it one of the city’s most prominent architecture landmarks for locals and international visitors since its completion in 2012. With a total floor area of 90,743 sqm, the newer city hall building was designed to be a place for conducting municipal affairs as well as welcoming citizens, where the older traditional building was converted from the original city hall to Seoul Metropolitan Library. 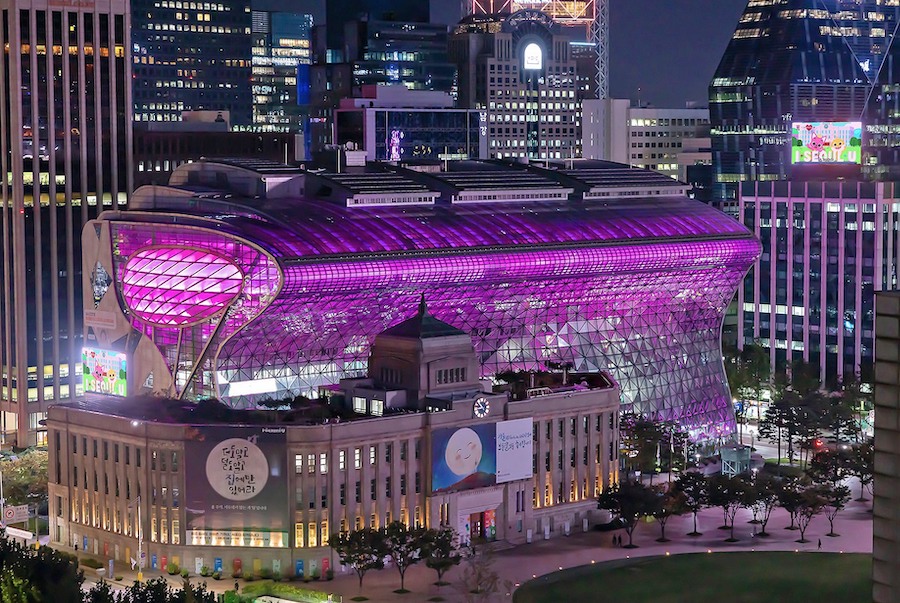 Inside the building, the 7-story Green Wall about the size of a soccer field were planted with over 70,000 plants from 14 different species, which gained the Guinness World Records as the largest vertical garden in the world. The symbolic artwork “Meta Epic: SeoBeol” symbolises the Seoul’s history over 2000 years, by incorporating light, pathway, and “tornado” characteristics. 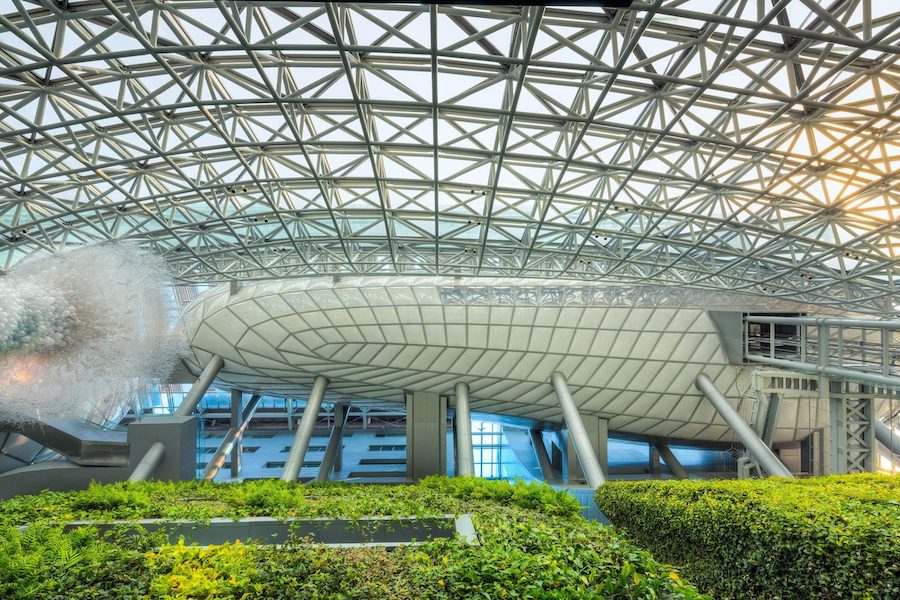 In lighting the Seoul lantern, participants have to solve the quizzes on Seoul to earn and collect different materials for making of a lantern according to the team’s preference. 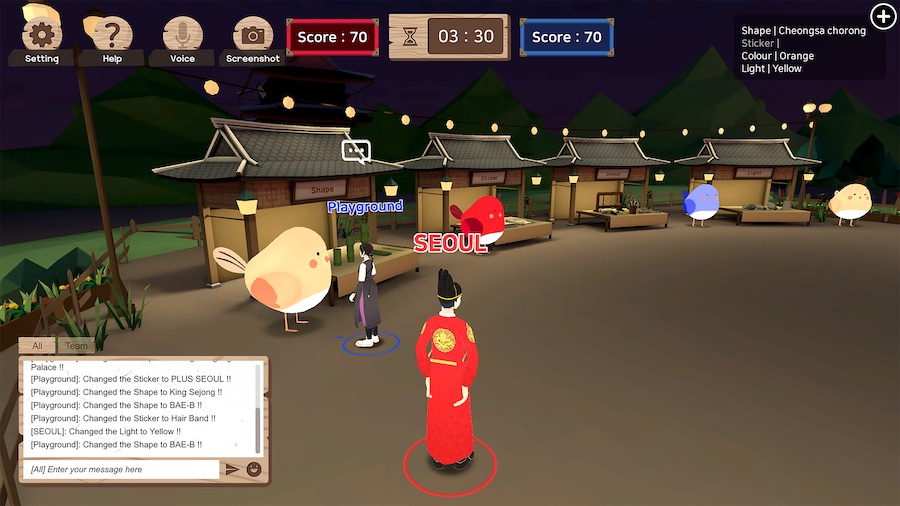 Here, you can experience how to make your colourful lantern with your team and write down your wishes, then let it float above the Hanging River! 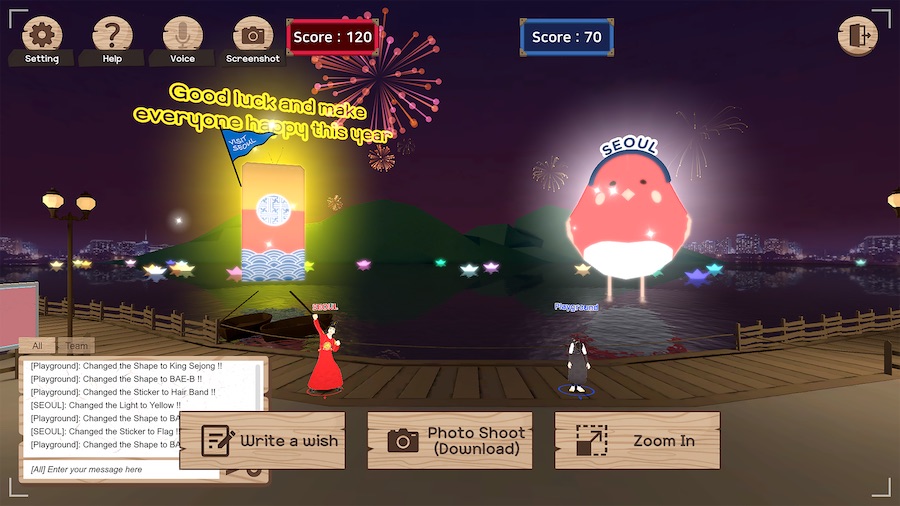 Venue: Some Sevit
The activity is hosted on the Some Sevit by the Hangang River, where visitors can enjoy the breathtaking scenery of Hangang River and Seoul’s skyline under the blue sky in the day time and the stunning night view with the three floating islands that glow up constantly changing colours at night.

In the olden days, Korean will put a wish message on their lanterns for well-beings of themselves, their families, neighbours and the society, and let it float down the stream.

Every November, hundreds of Hanji lanterns and LED sculptures, each with a unique design and story, will be displayed and lit on the 1.3km long path that runs along the Cheonggyecheon Stream, together with various K-culture programmes including floating wish lanterns, making paper fairytale lanterns, making traditional lucky fortune lanterns.

Gimbap is a Korean dish made from cooked rice and other ingredients that are rolled in gim and served in bite-sized slices. Gim is dried sheets of seaweed, and bap means cooked rice.

You must first experience its food in order to truly understand a country’s culture, and there is no better way than to try your hand at making the traditional K-food yourself. Now, let’s try to make the tasty Gimbap virtually with your teammates!

On the Virtual Seoul Playground, you and your teammates can work at different stations to collect the main ingredients such as egg, vegetables, seaweed and rice to make as many gimbap as possible. Hence, smooth cooperation is required to win the game. 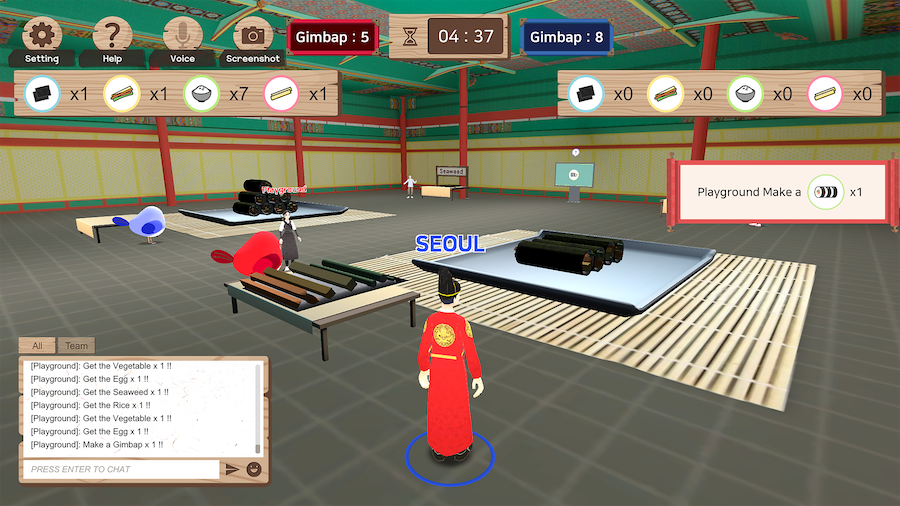 Venue: Changdeokgung Palace
Changdeokgung Palace, one of the 5 beautiful royal palaces situated in the heart of Seoul, acting as the virtual venue for the making of Gimbaps. Awarded as on UNESCO World Heritage Site in 1997 for its historical architecture and garden design, Changdeokgung Palace is the second palace of the Joseon Dynasty preserved its unique beauty on its interior and exterior designs until today.

Admire the Korean floral patterns that painted on the roof beams in this virtual palace by scrolling the cursor in 360 degree direction as how you will observe it during your visit to the palace. 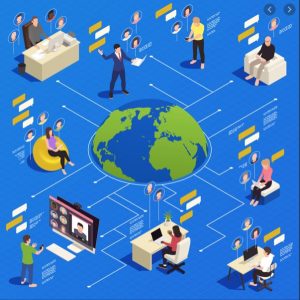 By putting Korean capital in the sights of international event planners, the Virtual Seoul Playground incorporates K-culture elements into gamification digital arena with choices of avatars in different hanbok for three Korean traditional games that encourage cooperative play between participants towards the same goal. In addition, event planners can simply upload a link on their event page or organise more engaging events such as posting the screenshoot on SNS channels or arrange a tournament among delegates for a specific time. 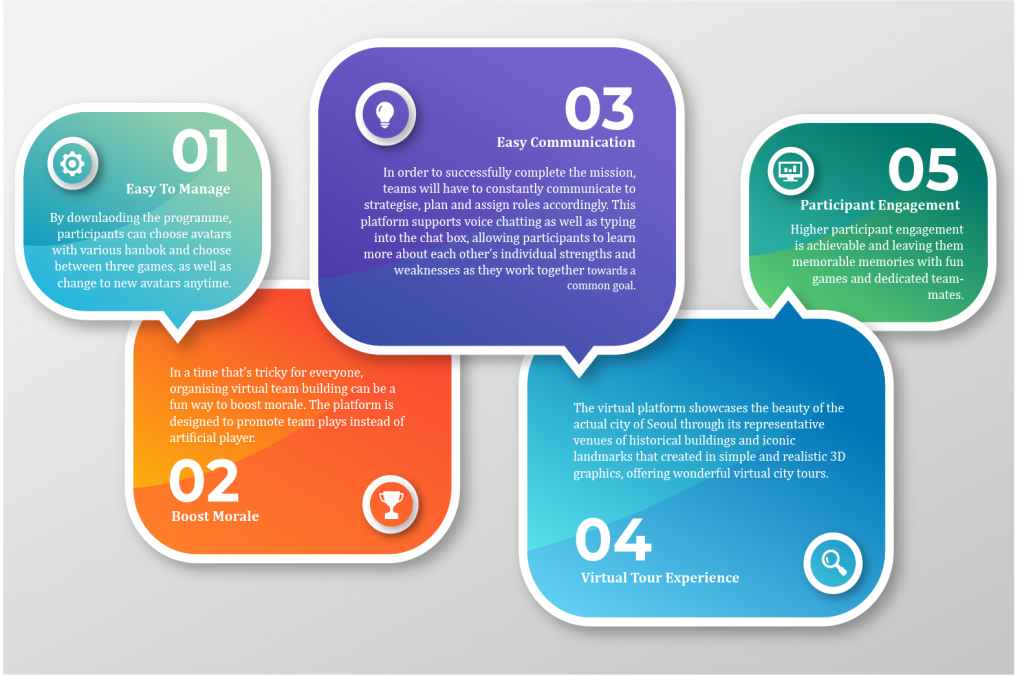 If you interested on the Virtual Seoul Playground,  please visit virtualseoul.or.kr to download it and use it instantly. Please feel free to contact Seoul Convention Bureau for additional information.